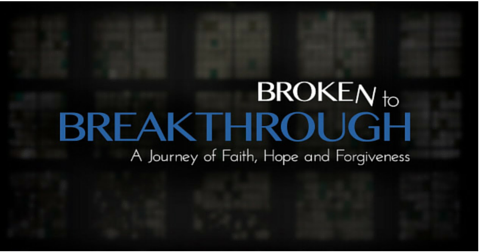 Ever since I learned about Christian Berdahl’s From Broken to
Breakthrough DVD series, which highlights his family testimony of Christ taking them from abuse and giving them victory, I knew I wanted to watch it! Previously, I’ve heard Christian Berdahl give his personal testimony, but what makes this DVD different is I was able to hear from his mother, two brothers, his biological dad, his second step dad, and his teacher. This made his story richer, and I learned additional information that I would never gain if I just had listened to Christian by himself.

From Broken to Breakthrough actually comes with 3 hour long dvds, so this is why I’m breaking up the review in stages. I’ve only watched the first DVD so far.

For those who haven’t seen it, please watch this trailer of From Broken to Breakthrough:

The DVD starts out with Christian mentioning Revelation 12:11, which says how people overcome Satan. “…They overcame him by the blood of the Lamb, and by the word of their testimony.” See also Rev 12:9. I really like how Christian emphasized victory in Christ at the beginning of his DVD. As his family’s story is shared, one could wonder if Christ could even heal those who have had such dysfunctional home environments like Christian and his family, but Christian quickly helps us know that Christ is more than able to deal with brokenness.

Here are some details of Christian’s background:

Jonathan: “David, there is no issue of domestic violence in my home. Period.” Can You Pass The Quiz I Miserably Failed?