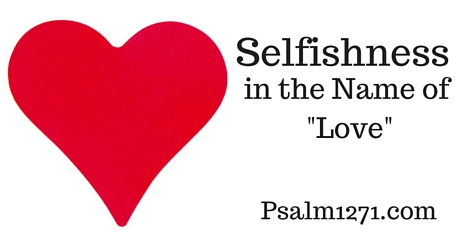 Selfishness, In the Name of “Love”

Have we bought into the ideology that Saul could love his son while trying to kill him at the same time? The answer all depends on how we define the word “love.”

One month ago, I wrote this to my readers: “Saul cursed his son Jonathan in around 11 seconds, then he basically said he had Jonathan’s best interest at heart because he said he wanted Jonathan to be king. Moments later, Saul threw a javelin at him. 1 Samuel 20:30-33. Did Saul love Jonathan?”

As I’ve asked this question in real life, sometimes the majority of the people said, “Yes, Saul did love his son.” Now, I will give my response.

Have We Bought Into Disney’s Definition of Love?

If we have bought into Disney’s definition of love, one can be yelling and romantic at the same time, but is this true love?

Below is an excerpt of a transcript from Mickey Mouse Monopoly, a movie put out by the Media Education Foundation. Among other things, it analyzed how Beauty and the Beast helps perpetuate domestic violence by giving viewers a false view of love.

“CAROLYN NEWBERGER: A great deal of my work and my professional life has to do with family violence. And when you look at that movie with that eye, the abuse is horrific…He [The Beast] screams at her [Belle], he imprisons her, he throws her father out the door and rips her family away from her. His behavior is, without question, frankly and horrifically abusive.

…And yet, the whole thrust of the story is that she returns to him, that she socializes him, that she excuses him. That she reinterprets his rage and his abuse as temper, that she reinterprets his personality as tender and vulnerable, and then that she falls in love with him…And this is a movie that is saying to our children, ‘overlook the abuse, overlook the violence, there is a tender prince lurking within, and it’s your job to kiss that prince and bring it out, or to kiss that beast and bring the prince out.’ That’s a dangerous message.

MELINA, age 9: If Belle was my friend and I’d seen her go through this whole thing, I probably would say, keep being nice and sweet as you are, and that probably will change him and in the movie he does.”

I’ve watched Beauty and the Beast many times growing up, and I enjoyed the movie. After all, I spent my first 19 years in Florida. I loved going to Disney and watching Disney movies, but I didn’t think about these false messages of love contained these movies. I don’t think of the Disney movies I watched growing up as entertaining anymore. According to nine year old Abigail, one can be “yelling and romantic” at the same time. In other words, based on the context of Beauty and the Beast, one can engage in acts of domestic violence and still be loving. Do we believe this?

Have we based our definition of love on Disney movies, or is it based on the unerring Word of God? If we’ve grown up watching movies similar to this one, and that viewpoint hasn’t been altered by the Word of God, we’re in grave danger of having a wrong view of love. We can easily get into a “loving” relationship with someone who is “yelling and romantic” and believe that “being nice and sweet” will change him or her. Should we really be attracted to that type of love in the first place?

“Have we based our definition of love on Disney movies, or is it based on the unerring Word of God?”

In order to steer clear of that route, we need to know more about this word “love” from a Biblical perspective.

The Bible Says The World Can Only Give Selfishness, In The Name of “Love”.

Why do sinners give love? Why do sinners do good or lend to others? They do these actives so they can get something out of it. Christ said the guiding principle for sinners’ love is selfishness. “Men shall be lovers of their own selves.” 2 Tim. 3:2. God says, “Let love be without dissimulation.” Romans 12:9. According to Strongs, our love should be without hypocrisy. This verse highlights that there is a love that appears like true love, but it’s really very deceitful in its nature. This is only what the world can give.

“This verse [Romans 12:9] highlights that there is a love that appears like true love, but it’s really very deceitful in its nature. This is only what the world can give.”

Biblical Examples of Selfishness, Disguised in the Name of “Love”

Samson “loved a woman in the valley of Sorek, whose name was Delilah.” Judges 16:4. In the name of love, Delilah provoked Samson to tell him the source of his strength. “…She said unto him, How canst thou say, I love thee, when thine heart is not with me? thou hast mocked me these three times, and hast not told me wherein thy great strength lieth.” Judges 16:15. In the name of love, “she pressed him daily with her words”. Judges 16:16. This plea for love wasn’t really love, it was selfishness. Her conditions for Samson showing her love were based on him sharing with her the source of his strength. Delilah wasn’t seeking Samson’s good; instead, she was seeking to give Samson over to the Philistines so she could get “eleven hundred pieces of silver”. Judges 16:5. Eventually, when Delilah told the Philistines about the source of Samson’s strength, “the Philistines took him, and put out his eyes, and brought him down to Gaza, and bound him with fetters of brass; and he did grind in the prison house.” Judges 16:21.

“This plea for love wasn’t really love, it was selfishness.”

In the name of love, Amnon laid a plot so he could rape his sister. 2 Samuel 13:3-11. Before the wicked act, he said to his friend, Jonadab, “I love Tamar.” 2 Samuel 13:2-4. Then “being stronger than she [Tamar], [Amnon] forced her, and lay with her.” 2 Samuel 13:14. Amnon “…would not hearken unto her voice…she answered him, ‘Nay, my brother, do not force me; for no such thing ought to be done in Israel: do not thou this folly.’” 2 Samuel 13:14, 12. Amnon’s statement of affection for his sister wasn’t really love, it was selfishness. He forced her against her will to gratify the desires of his wicked heart.

The Bible says, “king Solomon loved many strange women.” 1 Kings 11:1. In the name of love, Solomon’s “wives turned away his heart after other gods.” 1 Kings 11:4. “Then did Solomon build an high place for Chemosh, the abomination of Moab, in the hill that is before Jerusalem, and for Molech, the abomination of the children of Ammon. And likewise did he for all his strange wives, which burnt incense and sacrificed unto their gods.” 1 Kings 11:7, 8. Solomon didn’t possess true love; his “love” for those strange women led him to worship Molech, a false god associated with child sacrifices. Jeremiah 32:35.

If I read off those above characteristics of worldly “love”, people definitely wouldn’t call it love. Who would be attracted to something that is selfish, hypocritical, ungovernable, forceful, and etc.? Many times when we talk about love, it’s in the context of unselfish love, which only comes from God.

“If I read off those above characteristics of worldly love, people definitely wouldn’t call it love. Who would be attracted to something that is selfish, hypocritical, ungovernable, forceful, and etc.?”

Can True Love Ever Originate From An Unconsecrated Heart?

It is true that evil men can demonstrate natural affection (Luke 11:13), but can true love ever originate from an unconsecrated heart?

“Beloved, let us love one another: for love is of God; and every one that loveth is born of God, and knoweth God. He that loveth not knoweth not God; for God is love.” 1 John 4:7, 8

“Beloved, let us love one another: for love is of God; and every one that loveth is born of God, and knoweth God. He that loveth not knoweth not God; for God is love.” 1 John 4:7, 8

“Supreme love for God and unselfish love for one another—this is the best gift that our heavenly Father can bestow. This love is not an impulse, but a divine principle, a permanent power. The unconsecrated heart cannot originate or produce it. Only in the heart where Jesus reigns is it found.” Acts of the Apostles, 551.

What is True Love?

Did Saul Truly Love His Son?

First of all, we have to consider the background of 1 Samuel 20. That chapter is about whether or not Saul was “determined” to kill David. 1 Samuel 20:1-9. Two days before the javelin was thrown at Jonathan, David said to Jonathan, “…there is but a step between me and death” because he thought Saul was determined to kill him. “Saul cast a javelin at him [Jonathan] to smite him: whereby Jonathan knew that it was determined of his father to slay David.” 1 Samuel 20:33. Saul didn’t plan to kill Jonathan, but he had premeditated murder in his heart. Therefore, this act of domestic violence wasn’t random. He had days to think about it before he hurled the javelin to kill Jonathan, which was originally intended for David. 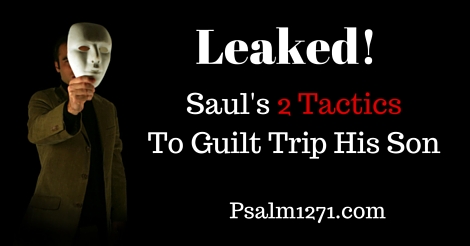 Was that act selfish?
Yes.

Did Saul portray an appearance of goodwill in that act by basically saying he wanted his son to be king?
Yes. 1 Samuel 20:30, 31.

Was Saul ungovernable and unreasonable?
Yes.

Was he forceful towards his son when he threw his javelin at him?
Yes.

Did Saul have strong feelings not under the control of the spirit of God?
Yes.

Did Saul have an unconverted heart?
Yes.

Did Saul’s character tend to seek to honor God supremely in his life?
No.

Was Saul seeking to follow the law of God through the Holy Spirit’s power?
No.

Was Saul’s life based on the Word of God?
No.

True love always has a demonstration. Romans 5:8; John 3:16. Where was the demonstration of Saul’s love for his son in the Bible?

In my studies, I haven’t found a demonstration of love from Saul to Jonathan.

Did Saul truly love his son?
Unequivocally, no.

What Could Have Been the Ramifications of Saul Not Loving Jonathan?

Jonathan could have based his identity solely in his abusive father, which could have ruined his concept of value and self worth.

Do we believe today the lies about us from selfishness in the the name of love? How does having the proper view of true love help us to confront those lies?