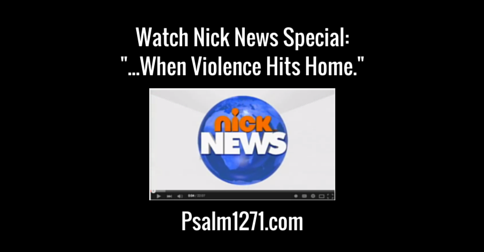 Today, I watched an Emmy-Nominated Nick News with Linda Ellerbee special, “Family Secrets: When Violence Hits Home”, about domestic violence. I heard stories of youth who had grown up with violence with their own homes. Like what was highlighted in “First Impressions: Exposure to Violence and a Child’s Developing Brain”, this video clearly shows that children are affected by domestic violence–even if they are not the direct physical recipients of it. One of the most gripping stories in the video was when a girl lost so much feeling of security with her father that she called the police on him as he was hurting her mother. Two years after leaving that caustic situation, she was in counseling. Her mind was still in need of being healed from that tragedy.

At the end of the video, one mother said that she grown up with violence in her home, and she vowed that in her relationship, things would be different. However, when she had children, she now was the one who was hit. This is why I believe it’s so important to educate ourselves on the importance of thinking about dynamics of domestic violence and dysfunctional relationships from a Biblical perspective so that we can break the cycle for good.

I was encouraged to see youth share their survivor stories to help themselves and others stop these tragedies from occurring in the first place.

You can watch the video below.

Nick News with Linda Ellerbee special “Family Secrets: When Violence Hits Home”
Can the Meditation of our Hearts Help Predict the Success or Failure of our Future Relationships? Part 2 Can We Really Carry Our Own Trials During The Day?