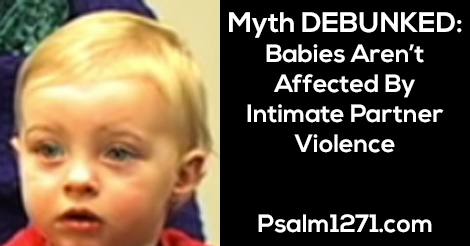 This 2 minute video provides compelling evidence why babies are definitely affected by Intimate Partner Violence (IPV) — even if they are never physically abused themselves.

Watch this experiment from the Institute for Learning and Brain Sciences:

The University of Washington wrote this about the experiment: “In the experiment, 150 toddlers at 15 months of age – an even mix of boys and girls – sat on their parents’ laps and watched as an experimenter sat at a table across from them and demonstrated how to use a few different toys.

Each toy had movable parts that made sounds, such as a strand of plastic beads that made a rattle when dropped into a plastic cup and a small box that ‘buzzed’ when pressed with a wooden stick. The children watched eagerly – leaning forward and sometimes pointing enthusiastically.

Then a second person, referred to as the ’emoter,’ entered the room and sat down on a chair near the table. The experimenter repeated the demonstration and the emoter complained in an angry voice, calling the experimenter’s actions with the toys ‘aggravating’ and ‘annoying.’

After witnessing the simulated argument, the children had a chance to play with the toys, but under slightly different circumstances. For some, the emoter left the room or turned her back so she couldn’t see what the child was doing. In these situations, toddlers eagerly grabbed the toy and copied the actions they had seen in the demonstration.

In other groups, the angered emoter maintained a neutral facial expression while either watching the child or looking at a magazine. Most toddlers in these groups hesitated before touching the toy, waiting about four seconds on average. And when they finally did reach out, the children were less likely to imitate the action the experimenter had demonstrated.”

“Most toddlers in these groups hesitated before touching the toy, waiting about four seconds on average. And when they finally did reach out, the children were less likely to imitate the action the experimenter had demonstrated.”

The toddler in this YouTube video didn’t touch the toy after 20 seconds when the emoter was in the room. It was easy to tell that his learning progress was very much stifled after this short, but caustic incident. As you can see from the expressions on his face, he was very much involved in the stimulated argument, even though no angry words were being spoken to him.

The researchers from the University of Washington found that “that children as young as 15 months can detect anger when watching other people’s social interactions and then use that emotional information to guide their own behavior.” In order words, when toddlers hear and/or see an argument, we need to know that they definitely are affected by it, and it can even hinder their own development emotionally and in even other areas of life.

This video reminds me of one of the “5 Memorable Quotes From ‘First Impressions: Exposure to Violence and a Child’s Developing Brain'”. Linda Chamberlain, Ph.D., MPH, Founding Director of the Alaska Family Violence Prevention Project, said, “We have the opportunity to do police ride alongs to a domestic violence situation, and so this was actually the first call I actually ever rode along. It was dinner time, and they were having spaghetti for dinner. It was dripping down the walls. The kitchen table was overturned. And we had three children in the household.

Looking at this whole situation at the time, we said, ‘No evidence of physical harm. The kids are fine.’ We learned differently, of course. The boy in the corner [had] classic behavior that we see with kids who have chronic exposure to violence. He would just completely zone out, numb out, as things started to get scary. The six year old girl on the chair blames herself for what is going on, but actually it was four years later that we really appreciated who had some of the most profound or severe harm coming out of this situation, and that was the six month old baby who was now four and a half and had seriously injured another child in preschool.”

“…It was four years later that we really appreciated who had some of the most profound or severe harm coming out of this situation, and that was the six month old baby…”

An article called “Childhood, Disrupted” cited a survey that was done of “17,000 individuals on about 10 types of adversity, or adverse childhood experiences (ACEs), probing into patients’ childhood and adolescent histories.” Some “questions looked at types of family dysfunction that included growing up with a parent who was an alcoholic or addicted to other substances; being physically or emotionally neglected; being sexually or physically abused; witnessing domestic violence; having a family member who was sent to prison; feeling that there was no one to provide protection; and feeling that one’s family didn’t look out for each other. For each category to which a patient responded ‘yes’, one point would be added to her ACE score, so an ACE score of 2 would indicate that she had suffered two adverse childhood experiences.”

“To be clear, the patients Felitti and Anda surveyed were not troubled or disadvantaged; the average patient was 57, and three-quarters had attended college. These were ‘successful’ men and women, mostly white, middle-class, with stable jobs and health benefits. Felitti and Anda expected their number of ‘yes’ answers to be fairly low.”

“These were ‘successful’ men and women, mostly white, middle-class, with stable jobs and health benefits.”

“When the results came in, Felitti and Anda were shocked: 64 per cent of participants answered ‘yes’ to having encountered at least one category of early adversity, and 87 per cent of those patients also had additional adverse childhood experiences; 40 per cent had suffered two or more ACEs; 12.5 per cent had an ACE score greater than or equal to 4.”

“People with an ACE score of 4 were twice as likely to be diagnosed with cancer than people who hadn’t faced any form of childhood adversity. For each point an individual had, her chance of being hospitalised with an autoimmune disease in adulthood rose 20 per cent. Someone with an ACE score of 4 was 460 per cent more likely to face depression than someone with a score of 0.” You can click here to read more of the connection of ACEs with illnesses later on.

How Can We Stop Children From Witnessing Intimate Partner Violence?

As the study from the University of Washington pointed out, children are observational beings. They can notice visual and audio cues from us. Just trying to change our behavior outwardly is not enough because eventually children will notice what is latent in our hearts. The Bible says, “…As he thinketh in his heart, so is he…” “Keep thy heart with all diligence; for out of it are the issues of life”. “…Out of the abundance of the heart the mouth speaketh”. Proverbs 23:7; Proverbs 4:23; Matthew 12:34. Whatever we’re allowing our minds to dwell upon will be what influences our character.

“Apart from divine power, no genuine reform can be effected. Human barriers against natural and cultivated tendencies are but as the sandbank against the torrent. Not until the life of Christ becomes a vitalizing power in our lives can we resist the temptations that assail us from within and from without.” Ministry of Healing, 130.

“Apart from divine power, no genuine reform can be effected.”

Only as we gain help from God can our characters be transformed into the image of Christ. “Except the Lord build the house, they labour in vain that build it…” Psalm 127:1. Only as we allow God to build our characters through the regenerating power of the Word can He build our houses through the similitude of Christ. As we behold His peaceful example in the Word of God and choose to let Him live in us, He will give us the power to overcome strife. By beholding Christ each day, we will be changed into His image. 2 Corinthians 3:18.

Nathan Johnson said this on Facebook about allowing the Lord to build our homes: “The Children of Israel donated the materials for the Sanctuary out of freewill, and the specified men built the tabernacle, but God gave the instructions specifically of how it was to be built. We may build the house with our own hands, but the spirit of the home will not be of peace and quietness if we do not heed to the patterns that God has instructed to us. Though, our home is in part made by our hands, a successful home is built by the hands led by God and by the prayers of the faithful builders. Let the home be like a sanctuary, a place for God’s presence to be welcome.”

As I pointed out in my book, strife only comes as we transgress the Word of God. Psalm 119:158; Proverbs 17:19. God’s Word is also the power to help us overcome dysfunctional backgrounds and mindsets.

Will we choose to be led by the principles in the Word of God so we can give our families, friends, and communities a right example of what it means to abide in Christ and be free from strife?

1. “5 Memorable Quotes From ‘First Impressions: Exposure to Violence and a Child’s Developing Brain'”

4.“The Importance of Thinking About Domestic Violence and Dysfunctional Relationships”

Affects of domestic violence on children Breaking the domestic violence cycle Biblically Children and Domestic Violence First Impressions: Exposure to Violence and a Child's Developing Brain
LEAKED! Saul’s 2 Tactics To Guilt Trip His Son Did Saul Love His Son? What are Your Thoughts?